Synopsis of the novella The Platinum Raven by Rohan Quine

Synopsis of the novella
The Platinum Raven by Rohan Quine

The Platinum Raven by Rohan Quine is a triple convulsion whereby our heroine Raven escalates herself into the Chocolate Raven and then the Platinum Raven, from London to Dubai to the tower in the hills in the desert—then back down again, forever changed. The daydreams of the downtrodden Raven propel her into a fantasy life as a more glamorous version of herself: a party girl living in the world’s tallest building, the Burj Khalifa. This latter’s imagination then spawns a yet more empowered and intense version of herself, as empress of a sequence of events whose fusion of extraordinary beauty, violence and sensuality is bewitching… A Distinguished Favorite in the NYC Big Book Award 2021. 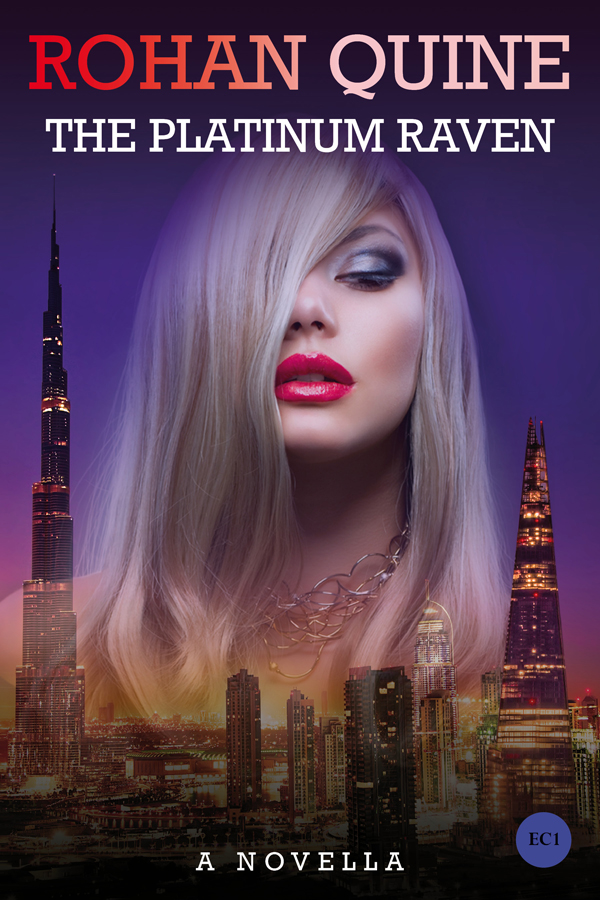 For some great reviews of The Platinum Raven, click here.

Buy The Platinum Raven in paperback or ebook or audiobook format.

For the basics about The Platinum Raven, click here.

In her cubicle high in the Shard in London, a sweet-natured, raven-haired receptionist named Raven is even more rudely mistreated than usual for a Monday morning. Recovering from this, her daydreams propel her into the fantasy life of a richer and more glamorous version of herself, who lives higher up in the world’s tallest skyscraper—the Burj Khalifa, in Dubai. Raven thinks of this woman as the Chocolate Raven, owing to her chocolate-coloured hair, which frames a face that’s just like her own; and straightaway, Raven cannot get enough of watching this glamorous creature.

The Chocolate Raven is a party girl whose lifestyle has a certain flash, albeit a certain flatness too. Standing on the vertiginous 152nd-Level terrace of the Burj Khalifa, she gazes across the desert at dusk, to the rock-slopes of the Hajar Mountains—and a mad-faced nightclub tower of shadow sprouts up, there on those slopes, from her gaze. This tower is run by a woman with a face just like the Chocolate Raven’s, but with platinum-blonde instead of chocolate-coloured hair, who lives a yet more empowered and intensely-coloured life: for she is the Platinum Raven, no less. And tonight she will preside over the launch of a revolutionary new club drug called mirror mist.

Between this uber-glamorous Platinum Raven and her companions Scorpio and Amber, there unfolds a sequence of events whose fusion of extraordinary beauty and violence and sensuality so bewitches the watching Chocolate Raven, that she is miserably desolate as soon as these events finish at dawn when the rising desert sun destroys that nocturnal tower on the rock-slopes. She therefore sets out on a mission to regain the voltage of the vanished building and the allure of its exotic denizens … whereupon a stark piece of evidence of the Platinum Raven’s realm is channelled through the Chocolate Raven and is pulled right back down to earth in the original daydreamer Raven herself.

The Platinum Raven‘s synopsis is here too:

Table of Contents of The Platinum Raven

THE CHOCOLATE RAVEN
2. The most beautiful building in the world
3. Fronds A to P
4. Chocolate hair on white silk
5. The bellow on the rock-slopes

THE PLATINUM RAVEN
6. Platinum hair on black silk
7. Purple and red and yellow and … on fire
8. The mad-faced tower in the mountains
9. The squirly brown windows in the turret
10. Santa Monica Boulevard
11. In the arms of the man from the garden of love
12. The pug among the struts, in the pale blue strait-jacket
13. Black and rust and ochre over the plain
14. Slinky-smooth in the mirror mist
15. Planets hanging heavy
16. The adventures of the dead girl
17. A kiss of jagged glass
18. I see you!
19. Mirrors in the labyrinth
20. Analysis of motion through CCTV
21. The Platinum Raven’s message-in-a-bottle
22. The black and red flower
23. The point of silver in the dawn
24. Catch you later!

THE CHOCOLATE RAVEN
25. Electric aliveness and happiness, remembered
26. Scent of fucked-up dark devouring hunger
27. Through the Spire to the Pinnacle
28. Whisper of Scorpio
29. Flash of Amber in Scorpio
30. Two Ravens on the freeway

RAVEN
31. The hair in the corridor

The 31 chapters of The Platinum Raven‘s Video-Book format are here:


Some short teasers for The Platinum Raven‘s Video-Book are here:

Buy The Platinum Raven in paperback or ebook or audiobook format.

Add Rohan Quine’s The Platinum Raven in Mobi or ePub or paperback format to Goodreads.