Talking points for The Imagination Thief by Rohan Quine

Talking points for
The Imagination Thief by Rohan Quine

For the basics about The Imagination Thief, click here.

So, what is The Imagination Thief all about?

Well, it’s illegal, immoral and fattening. It’s joyfully dark and wayward, and no proper reading for the innocent of mind or the fragile of ears, being the written equivalent of a five-layered chocolate cake containing an entire bottle of over-proof rum and a cocktail of controlled substances. Category-wise, it is literary fiction with a touch of magical realism and a dusting of horror.

My and The Imagination Thief’s mission was to push imagination and language towards their extremes, so as to explore the beauty, darkness and mirth of this predicament called life, where we all seem to have been dropped without sufficient consultation ahead of time. Our mission had three prongs: (1) to illuminate, as far as we could, using language in new and old ways, and thereby leave the world infinitesimally better than it was beforehand; (2) to aim and attune our ears as clearly as possible to the highest artistic potential we could reach, then bring down the richest results from that place, then give those results the truest and most beautiful form we could create; and (3) to make an honest account of the darkness and pain in the world, while at the same time being a vote for life (maybe even a blast of fun along the way).

What will the gentle reader get from reading it?

The Imagination Thief celebrates the darkest and brightest possibilities of human imagination, personality and language, aiming to reflect our internal lives in ways they haven’t quite been reflected before. It unearths surprising beauty and unexpected love, from behind and within the brutality of the world. It demands focused attention, but it repays this investment richly, even in a tough economy. It may be read as a linear novel with a coherent plot, but it may also be dipped and dived into; and wherever you dive in, it will shimmer back at you with love and poison, toughness and light—I promise!

Why did I write it?

My aim was to wring beauty from this harshly-designed life where we’ve been thrown; and then to explore and interrogate that beauty with rigour, sensuality and humour. Although the novel peers into some overpoweringly shadowy corners of our existence, as well as into many sunlit ones, I believe it suggests ways in which we may transcend some of those shadows while preserving emotional and aesthetic honesty, with love and sensuality and a healthy dose of mirth along the way.

What messages does it convey?

Among other things, I suspect The Imagination Thief may be suggesting that one way to increase our chances of raising our heads above the asphalt (our own heads and others’) is for all of us to put active energy into inhabiting and exercising our creative imaginations, however we’re able to. Also that there are glorious beauties, sensualities and dark riches in each of us—and those are treasures that each of us should love and own and inhabit, rather than ignoring them or being frightened of them.

Each of us is essentially alone; and depths of cruelty and suffering are able to target any one of us at a moment’s notice, if they decide to do so. Yet love, beauty and humour conti,ue to insist on arising between us and within us, making riches available to many of us if we reach for them. But perhaps what’s most bewitching is the glorious, multitudinous, messed-up fascination of our whole predicament.

Another aspect of The Imagination Thief to pick out here is perhaps that there are often two parallel narratives in our lives: the external narrative of coherence and balance that we use in everyday interactions as civilised participants in society (suggested by the more straightforward titles of the novel’s ten Parts, which are numbered I-X); and the less coherent, less balanced narratives that run riot within our imaginations (suggested by the more whimsical titles of the novel’s 120 mini-chapters, which are numbered 1-120).

One big cupcake, cooked up out of film, literary-fictional text, video, photos and audio

For a quick video introduction, head for “What is The Imagination Thief?”. Otherwise, I’d say that in its ebook format this tale is one big digital cupcake, cooked up out of film, video, audio, photos and literary-fictional text (this last ingredient being much the most analogue in the whole recipe), with a website as an optional hub. You can just read the text, which can stand alone; or you can consume the novel in its various media, either in linear sequence or dipping and diving. In the novel’s paperback format, the very same text stands alone and self-sufficient.

Its convulsive self-assembly and sharkiness

Some of the novel’s characters just arose in me fully formed, such as Angel, Shigem and Evelyn; while others came into slower definition, such as Pippa, Alaia and Kim. The whole book is strange and extreme and probably shouldn’t be allowed, but in all its media there was a quality of convulsive inevitability in its self-assembly, which made me tend towards trusting its own diva-esque instincts regarding how it wanted to be baked. The book’s narrator Jaymi has an experience similar to this, while he’s dealing with the entertainment mogul Marc in mini-chapter 5: “I observe another inspiration assemble itself in my mind and climb to its feet like a self-erecting tripod. Forget walking with the angels now, we’ve moved on from that. This has the feeling of a shark swimming right through me; those tripod legs have streamlined into fins…”

Seven themes in The Imagination Thief

(1) An ever-deeper exploration, tending to theft, of people’s imaginations, memories and personalities.
(2) A web of secrets and lies regarding exactly who may be aware of who may be spying into whom.
(3) The use of creative imagination for the purpose of transcending the everyday world, through igniting aliveness, wonder and beauty, both in oneself and in others.
(4) The iconic aura and allure that filmed and photographic images can conjure up and spin around their subjects.
(5) The disjunction between beauty and happiness: how the many kinds of beauty in the world, within people and outside them, seem to exist independent of the levels of misery/happiness or pain/pleasure in people.
(6) The disjunctions inherent in an onscreen presence: (i) possessing an incorporeal public self, in addition to the real-life flesh-and-blood self; and (ii) being sealed off in the small and unreal world of a recording-studio, in order to be minutely visible to numerous unknown viewers in the real and much wider world outside.
(7) The glamour of power—whether corporate or gang-based, physical or onscreen.

The Imagination Thief‘s talking points are here too: 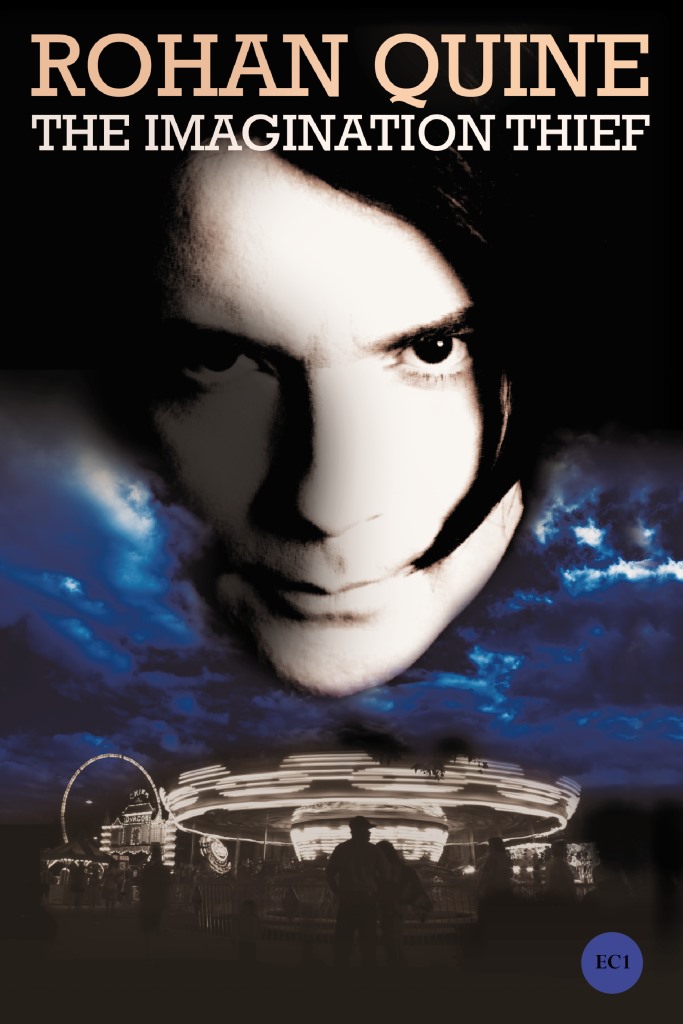 The 120 mini-chapters of The Imagination Thief‘s Video-Book format are here:


Some short teasers for The Imagination Thief‘s Video-Book are here: