In Hallucination in Hong Kong by Rohan Quine, sliding from joy to nightmare and back, a plane flight frames a journey into Jaymi’s and Angel’s polarised identities and perceptions, where past and present merge in an obsessive fantasy of love, death, horror and apocalyptic beauty. At take-off, warmed by the presence of his friend Angel beside him, Jaymi starts to doze, and enters a fog of horror in seeming to remember that their destination lies in the past, not ahead … forcing him to explore those hellish possible events lying beneath the surface of our present and future, always ready to break through into reality. A Distinguished Favorite in the NYC Big Book Award 2021.

For some great reviews of Hallucination in Hong Kong, click here.

Buy Hallucination in Hong Kong in paperback or ebook or audiobook format.

For a synopsis of Hallucination in Hong Kong, click here. 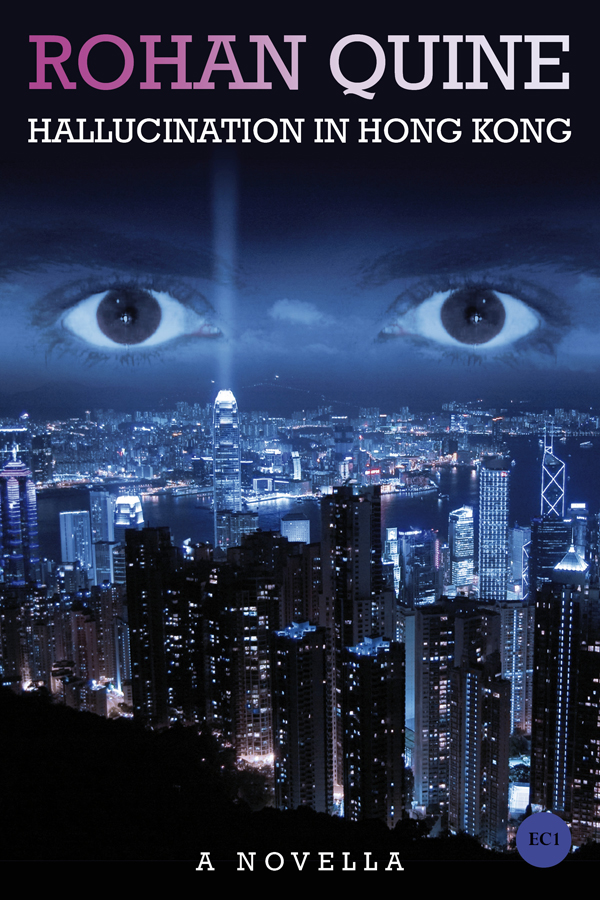 First taster of Hallucination in Hong Kong, from chapter 2 “Love among the spires and the fountains”

[…] The next day. Two-fifteen, and there you were. Your T-shirt was turquoise. “D’you know about the garden?” I asked.

So out from the bar and down the back road we bubbled, to the corner where the path between the hedges begins. Cyclists swerved to pass us. By an iron gate we stopped. You darted up to peer between the bars and shot a glance of excitement at me over your shoulder, as you saw for the first time the lawn sloping down to the silver birch glade where the sap burned heavy through a lazy sway of branches. Behind us somewhere in the distance on the wind, over roofs, played a clarinet. Reaching around you, I slid the heavy key into the lock, turned it gently and pushed.

With a low squeak, the gate swung wide.

Inside, I pushed it shut. You scudded through the bushes to the edge of the expanse of lawn and stopped. Cedars rose in state beyond the grass out of high beds of foliage, where other secret regions of the garden could be glimpsed. Gnats danced pin-pricks in the air above a sundial, like the ticking of the seconds—like a hundred years before. Above, blue radiance.

You gave a sort of wiggle as you reached to touch my arm, while the colour and the light within your eyes were as your whisper—“This is magic!” Through your hair shone the sun, as sirens sing. Between us now the crackle was electric.

Setting off across the space, I turned to meet you running up behind me with the smile of a child. “Let’s go!” I said.

And so we went; and sitting in the glade, together alone at length and sweetly, we talked for many hours—a talk that felt like running through a field. Laughter flung our friendship up in shafts, till our words were made of instinct and intimate inconsequence. We fell quiet at last, no need to speak. Clarinet strains lapped again across the lawn and through the glade, and came to mingle with the ripples of the sunny sea of leaves upon whose amber crackled surface we were buoyed.

Then, with the simplest of manoeuvres, your warm shy body lay alongside mine, and the touch of its affection felt to me as sun on stone.

I looked at you, and happiness flowered in me like a burst. Your eyes gazed at mine through your lashes; turned away. (No, you weren’t very good at eye contact then.) I held you closer still and whispered in your ear. And so we lay, till liquid birds lulled and coaxed through the rich soft dusk.

Then we sneaked quick and quiet across the twilight of the lawn, past the sundial and back through the shrubs to the gate. Your upper lip sweated faintly. My mouth was alive, juices like wine…

Behind us, the gate swung shut with a clang.

Second taster of Hallucination in Hong Kong, from chapter 2 “Love among the spires and the fountains”

[…] Soon afterwards, at night, through suburban streets from elsewhere: you and I, returning home, saying little. Among the chimney-stacks, as if among the blackened points of pine along a dead plantation road, wept the wind.

Inside, dog-tired, we crept through the building to your room, where I lay upon the bed. You put a tape on, wandered round and sang distractedly, an effortless falsetto so bloodless and beautiful, my head swam. Vague, you came at last to join me, lay your body’s light and weight on mine, encircled by my arms. Caress of lips and lashes; through our clothes along my limbs a glimmer ran warm and wide. Close above me clanged the symmetry and measure of your cheekbones and eyes, like a gong: desert-like, deadpan, softly they killed. But there was no communication there, not since I’d played you my music. Had I played it too soon? I attended to the track we were hearing, which I knew but had never really listened to. A love song, sweet, slow and sad, sung well with simplicity, sincerity and every other trick—and now it hit me. A dangerous sense of loneliness hovered just above me, poised, then slipped and enveloped me, clamped on my mind—on its separateness from you. A deadly pulse, I felt it grip me, fill me, drain me… Slowly, deeply, darkly and passionate we kissed, ineluctable as breathing: though the burn of your lips to me was agony, I couldn’t stop. All that stirred were our tongues, playing, sliding, stroking. I felt as if I stood back to spectate, a dark and lonely watcher at some doomed and slithery ballet. How arbitrary this union was, like any other: I and You in a random room, random building, random district, town, country, era—one twenty, one nineteen, and each supposing he is closer to the other at this moment than he was the day before they met or will be when they both start to rot. We each might as well have been another. I felt so alone, or ceased to kid myself I wasn’t. This was the first moment anyone had broken through the bubble I inhabited. I felt it was my bubble rather than yours that had broken. Your bubble touched me now, the unsheathed me. What if your bubble broke as well, to leave us touching? Would I weep, would I tremble as I clung to you? You lay your head face down upon my chest. I kept preparing words, kept seeing how inadequate they were, and always stopped myself from speaking. How to better “I love you” when it’s all there is to say but still a shortfall? I think I murmured it in any case, deliberately controlled, to stop you raising up your head to seek my eyes out with your own and draw me into them—to mask from you as well the agonised imploring face I shot around the room while I hoped (fearing to search) that there was not some dark coincidence of mirrors where you watched me and wondered what the hell I felt. What was happening? Where were you? Should I break through or not? How I wanted to, but knew I didn’t know what I would find, what reception I’d be given—didn’t know the risks involved. To melt your bubble open, or to seal them both again? It could still go either way…

Another second, then I chose. Chose to shift; and shifting, broke the spell. One move sufficed to seal me up again and leave you sealed: the victory of survival over grandeur. At first you didn’t stir. Then you had to, with a token noise.

No reunion, then, not yet. Just a separate tired proximity on a bed in North London, as the rain stung the windows.

Third taster of Hallucination in Hong Kong, from chapter 1 “So here is the horror, to sicken the sun”

[…] Hong Kong. The night arrives. I’m on the stage. The stage is dark and quiet.

I look down upon a cityscape of heads and sweating towers, where a murmured babble rises in the air. The gas burns high and clear a hundred metres either side. Ahead of me the moon is tinted peach, hanging heavy on the sharp black sky.

I turn to face the Peak, its bulk my backdrop. East and west, flame-lit crags start from shadow, flicker in silence to the rhythms of the dance of the jets. Underneath, softer slopes ripple out and fade away. Above me, phosphorescent sky, my ceiling.

A thud from high to right and left escapes the darkened speakers: skeins of birds fizz out from each, coil up and twinkle and evaporate, to prick the tiny sidelight nestling up beyond the cornice of the Peak.

Behind the stage, the screen, gigantic and dark, projecting focus of the multitude, aglow for my anticipated image.

Hooded figures scurry in the wings, and then are still. I shift my weight from side to side, then poise…

I bow my head a moment, turn and leave. The stage is dark and quiet again.

Table of Contents of Hallucination in Hong Kong

1. So here is the horror, to sicken the sun
2. Love among the spires and the fountains
3. Oh, my Angel

The three chapters of Hallucination in Hong Kong‘s Video-Book format are here:


Some short teasers for Hallucination in Hong Kong‘s Video-Book are here:

Buy Hallucination in Hong Kong in paperback or ebook or audiobook format.

Add Rohan Quine’s Hallucination in Hong Kong in Mobi or ePub or paperback format to Goodreads.