Synopsis of the novella Apricot Eyes by Rohan Quine

Synopsis of the novella
Apricot Eyes by Rohan Quine 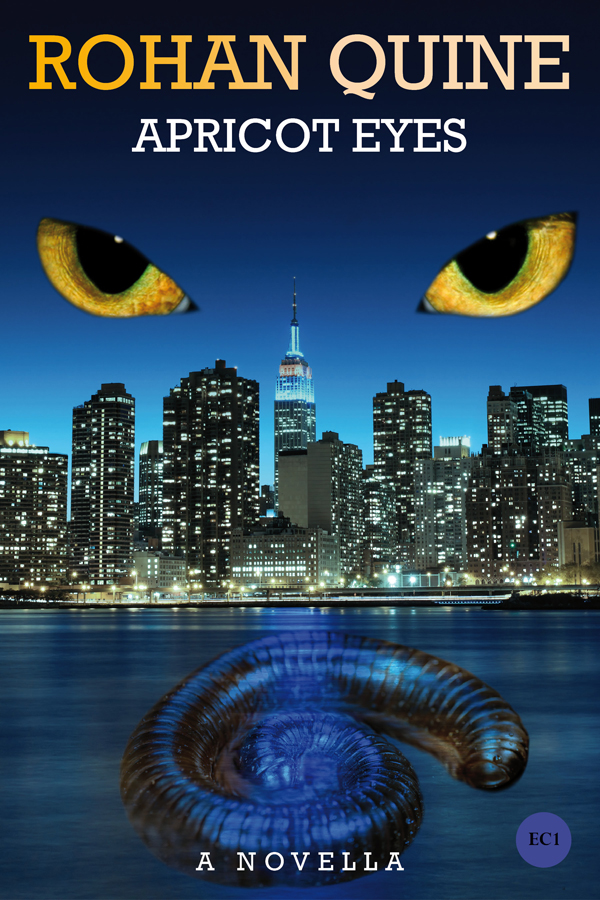 For some great reviews of Apricot Eyes, click here.

Having partially regained a power of second sight that he’d once possessed but lost, Jaymi Peek uses this ability in a live weekly television show online, where he channels onto the screen those unexpected places, hidden colours and hatching plans that he can perceive throughout New York City. He applies this sight to the task of relocating his old friend Scorpio, who has gone missing, but succeeds in catching only a glimpse of him in some unidentified corner of the city’s underbelly.

Across a subway station, Jaymi notices an unwelcome visitor from his and Scorpio’s past—Kev Banton, who has now become a prominent evangelical preacher intent upon a moral cleansing of the population. Jaymi tails Kev discreetly through the subway, and is surprised when Kev’s journey ends at a waterfront waste ground in an industrial corner of the Bronx, where Kev slips out of sight amid an odd hum of underground engines…

The monstrous population beneath this waste ground, and the malign purposes for which the preacher and his wife have been feeding it, are revealed in the course of a triangular cat-and-mouse pursuit involving Jaymi, Scorpio and the preacher. This unfolds in Scorpio’s physical pursuit of Kev through the crackle and night-pulse of the streets, from Times Square to the marginalised fringes of the city; in Jaymi’s psychic pursuit of Scorpio, whether streaking up high through the skyscrapers’ shine or secreted on a tanker as it rattles through the Bronx; and on screen, in the colourised shimmer of what Jaymi broadcasts live.

In its rollicking journey through these hidden planes of New York, to the simplicity and sensuality of its ending, Apricot Eyes is a blast of fun that trumpets boldness, tolerance and voltage, celebrating the mystery and dangers furled just behind the surface of the everyday.

Apricot Eyes‘s synopsis is here too:

Table of Contents of Apricot Eyes

1. Jaymi’s hunt for Scorpio
2. The black-thighed scorpion
3. The stalking on the subway train
4. The girls on West Fourteenth Street
5. The golden limousine and the sudden hanging legs
6. Ten screens of eyes in the neon
7. Phaon and the second like a teardrop
8. Screeching worms
9. A lapful of broken glass
10. A drag-queen drives a tanker
11. Ecstasy in Hunts Point


The 11 chapters of Apricot Eyes‘s Video-Book format are here:


Some short teasers for Apricot Eyes‘s Video-Book are here: