I feel a blush suffuse all four of my maidenly cheeks, to see the following super-cool review from Jen McFaul, writer and poet, as an essay-length article here. I’m honoured by her analytical and receptive reading, and grateful to be introduced to this peachy new literary-critical term, “trans-mindfuck”…

A trans-corporeal, trans-reality, trans-mindfuck, all-transcending diva of a debut: The Imagination Thief by Rohan Quine,
reviewed by Jen McFaul

Just so you know, when you open this book you will not be asked to love each character. It is neither discouraged nor encouraged. No other novel I can think of in recent times has so successfully portrayed its characters so transparently and so without guidance as to the feelings its audience should have towards them. Their skulls are prised open, as Jaymi burrows into their minds and blasts the contents out for us to dissect with no editing and nowhere to hide their darkest urges and most depraved imaginings. To love some of these characters would be to doom yourself, you are simply asked to observe them; to see them as deeply, as thoroughly as you see yourself, such is the all-encompassing clarity of Quine’s descriptive abilities. These characters are not mere sketches; they are Rembrandts with a touch of Picasso’s madness.

We open with Jaymi enjoying an innocuous CreamiChoc until the “last boiling drop of red sun sinks away”, and then he is suddenly, inexplicably endowed with the power to see into people’s imaginations, right down to the most primal aspects of us all; he can tune in without our knowledge, and can even record and project each mind, subject to his control, his hypnotic gaze. Initially Jaymi might be seen as a passive character, perhaps explaining why he is so easily able to accept these new-found abilities. He is the translucent lens through which we view our cast, the blank canvas splattered with the neon colours of our thoughts, and as he tests and hones these abilities we see him discover his ego through his unleashed power. Indeed, without his experiences in other people’s imaginations, would he come to the life-changing realisation he eventually reaches? On his journey to this personal revelation, Jaymi’s initial good intentions (the enlightenment of mankind) are deftly hijacked by Jason, who wishes to subvert this plan for commercial gains by creating a “spokes-sheep”. We roll from New York City to the ruinous ghost town of Asbury Park, where Jaymi selects our targets, the unknowing donors whose imaginations shall be harvested. Rather than a violation, Jaymi’s reading of this motley crew of players is performed with a tenderness and an unending respect for the spectacle of another’s soul in its entirety laid bare to us. There is magic in the twisted minds as well as in the sublime.

Some of the less salubrious characters spit piss and vinegar with astonishing vigour, but none the less the decadently rich language of this novel make it pure chocolate, wine and sex—you will need a cigarette as you turn the last page. This book reads like a musical. The words are liquid and melodic: always entrancing and encaptivating and rising to chorus-line lung-busting crescendos every time Jaymi unleashes his powers and the imaginations of his superbly diverse cast shine out of the page in an explosion of Sound and Vision. Given that he accomplishes this purveyance of the innermost soul with black words on a white page, what is indeed impressive is the sheer level of colour, smell, texture and heat that can be felt during these moments when we are invited to couple our minds with theirs.

As I have stated, this is a piece where the English language is flexed and stretched until it’s sweating on the floor in its yoga pants, and yet there are plenty of examples throughout to demonstrate Quine’s skill in summing up the state of a character in a few simple words. “Pippa in her high rise grave” encapsulates this character’s descent into crippling, unimaginable loneliness, tormented by spectres and skulls. Locked away surrounded by concrete—buried in her “grave”, and in her “high rise”—physically far above and separated from the world below, alone and staring out from her balcony with liquid eyes.

Quine is also generous with the dialogue he gives his characters. The best lines are not only reserved for the select few whose imaginations Jaymi is thieving, but by giving background characters priceless lines he draws a neat conclusion of their personalities without wasting words or detracting from our protagonists. For example the owner of the bar where Shigem hosts is given the gentle line, “Moonlight through dark glasses sometimes hurts my eyes”—a perfectly succinct piece of poetry neatly dropped into the middle of the page, which makes this understated, relatively unimportant character instantly flesh and blood.

We are presented with two sides of the same coin with the relationships of Lucan Abayomi and Angel Deon versus Shigem Adele and Kim Somerville. It is appropriate that we are shown these dual realities of a relationship in the same way that we see both the light and dark in each individual. Every possibility and eventuality is an open avenue down which we can walk, whether it be to enter the realm of shadow daggers in the turret where the Baby Doll swings languorously as Angel wanders the mezzanine, or to lie in the soft sweet bed where Shigem gently sinks into the Atlantic depths of sleep and sea fronds, safe in the arms of Kim. Angel and Lucan’s relationship examines “desire as disease”, and we have the neat contradictory image of Shigem and Kim’s relationship, “a beach idyll in its golden glow”. It is clear that there are other characters too, such as Evelyn and Rik, who are able to find light and love in their lives in the same way that Shigem and Kim have, and the warmth and tenderness of these characters serves to further illustrate that in contrast Angel is unable to escape the darkness, and by the time we meet him he has already been consumed by it. If Shigem and Kim, Evelyn and Rik are our redemption stories, there can be no doubt that the cautionary tale of Angel Deon is one of utter damnation.

One of the most notable moments in this work occurs after the climactic scene atop the ruined shell of a building standing tall over the ocean, where a fight conducted by both bodies and minds takes place and we feel we are done. We have been present at the climax and are now on the descent. However, we are given a reminder of just what power Jaymi has been exposed to, when we realise exactly the lengths Pippa has gone to for her wax dummy. This aftershock reminds us he has had the ability to see further into a person’s soul than perhaps we are even capable of seeing into ourselves. Is anybody really prepared for this level of self-reflection? Do we want this knowledge? Do we want a preview of our own deaths? Do you want to know just what those bloodstains mean, Pippa?

Jaymi is our guide through this world; he is the smoke that furls through the brains of our donor-imaginations, igniting each nerve centre as he rises. Is somebody who can truly see your soul a friend or foe? Despite Jaymi’s authority as our narrator, the English language is the true star of this trans-corporeal, trans-reality, trans-possibility, trans-mindfuck, all-transcending diva of a debut. 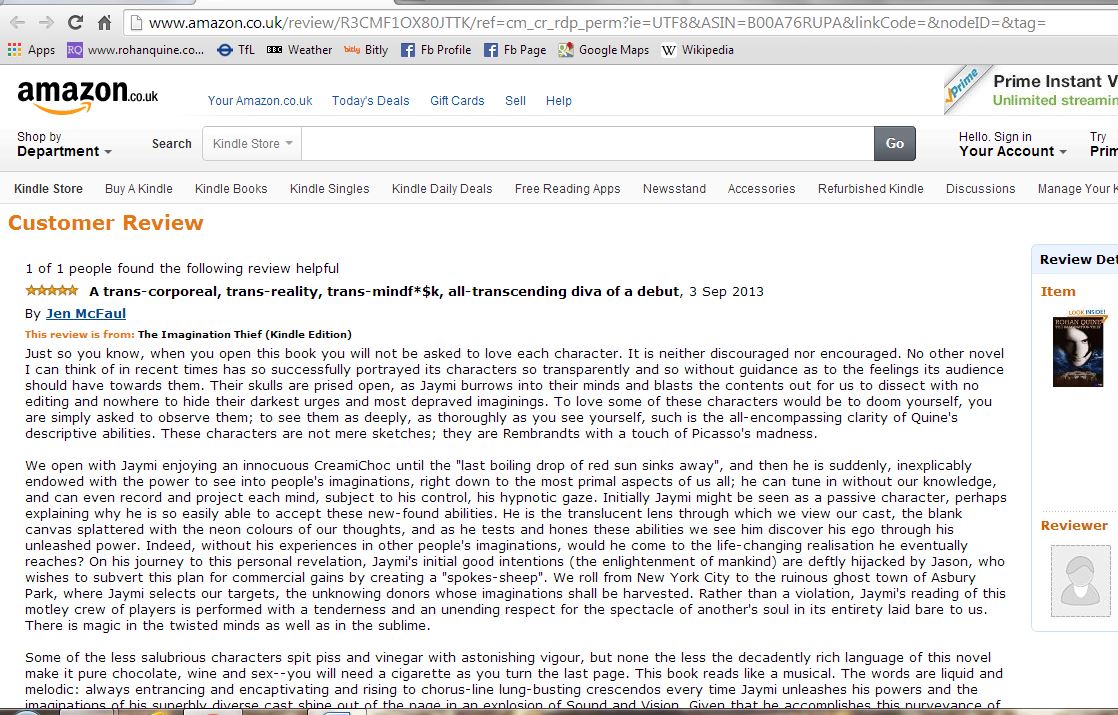 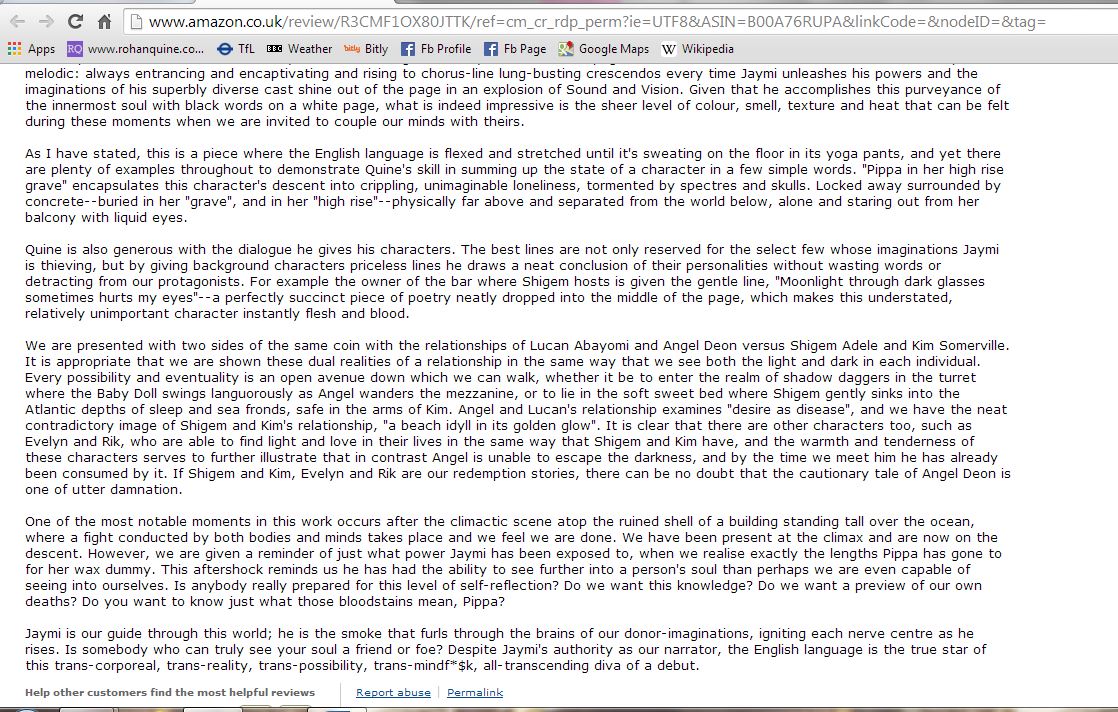