Transcription of the video “The Imagination Thief’s location, Asbury Park” by Rohan Quine

Transcription of the video “The Imagination Thief’s location, Asbury Park” by Rohan Quine

This story’s secondary location is New York City. But its primary one is the small town of Asbury Park, N.J., nearby on the Atlantic shore. For decades this was a popular and beloved resort. Among its many attractions, the wide-grinning face of Tillie, painted large on the wall of Palace Amusements long ago, was a prominent symbol of a place that tended to inspire the warmest of seaside memories in its visitors.

In the late twentieth century, however, it hit bad times. So much so that the eastern part of it, including the oceanfront with its long and once-bustling Boardwalk, became largely deserted—in some areas almost a ghost town. Although a few of the live music venues there continued their long and vibrant history throughout this time, nearly all the grand hotels now stood boarded up in grand ruin; some blocks of the street-grid lay desolate after their buildings had been razed; and one huge and very central newer structure ground to a halt in a state of abandoned half-completion that was destined to continue unchanged for more than another sixteen years until its eventual demolition on the morning of 29 April 2006.

The complex reasons for this decline may be read about in print and online—as well as accounts of the happier days that preceded it. The relevance of Asbury Park to The Imagination Thief is that the book was conceived and begun while I was staying there for two separate periods of one week each, in 2000 and 2001, visiting from New York. I took the first of those trips on a whim in order to start writing a story, because it was nearby and had inexpensive accommodation and was a lot quieter than the Lower East Side of Manhattan where I was living. Beforehand I had no reason to expect I would develop any particular feeling for the place once I was staying there, but this is what occurred—to the extent that I decided to use it as the book’s setting. The handful of New York City scenes and characters that comprise the first twelve mini-chapters had been written a few years earlier, without then getting round to finding a home for themselves, but now I realised that these would make a good springboard for the book’s main Asbury Park section that follows them; so the opening came ready-made, but from mini-chapter thirteen onwards a new tale was to be written.

What I started scribbling there, in a cavernous room numbered 629 on the north-west corner of Ocean and Sunset, happened to get put aside then for a few years after those two one-week visits, while I got distracted by various other shenanigans. Then it was resumed and put aside a couple more times, what with further delightful distractions, until it decided to get finished in its own sweet time now, like a drunken super-model staggering to the end of the catwalk with cocktail in hand. (And now there are a couple more novels well in the pipeline, the first of which is a related follow-up or semi-sequel to this one but with a setting that’s shifted to London.) The street-plan, buildings, businesses and other locations described in The Imagination Thief therefore add up to an exact snapshot of the brief time when I chanced to be in town, because all these details were taken from precisely accurate geographical notes that I jotted down on an online map print-out while I wandered around. The only two invented locations in the book are the bar named Downstairs and the secret television recording studio hidden inside the real-life ruins of the Metropolitan Hotel (now demolished). Since then, I’ve read that many structural elements have changed, but I’ve not had the pleasure of going back there, so I haven’t seen them.

I was aware at the time, of course, that the town wasn’t looking its best. Yet the spirit of the place transcended this and I found myself joining the ranks of those whose affections for it remained intact despite its ragged edges. Inevitably my affections partook of this very aspect of it, but they were neither ironic nor sentimental—they were just there. Since Asbury Park is an authentic cultural icon and therefore inspires many people to feel protective of it as a widely-shared symbol and plot of socio-historical ground, I was also aware that there was a certain cheekiness in my finding it so natural to use it as a setting, when I hadn’t lived there and hadn’t known its better days. From my descriptions of it, however, my affection for it is obvious, I believe; and in any case, something tells me the place will survive my cheek just fine, thank you.

I was aware too, gazing up at the resonantly silent Tillie on the Palace Amusements wall, late one night at the desolate far end of Cookman Avenue with the Atlantic Ocean booming on my left, that perhaps there was also an element of strangeness in pairing Asbury Park with the rest of The Imagination Thief. But life is full of strange juxtapositions and the strange beauty of all our internal imaginations—and that’s where many of our richest possibilities are really on offer. 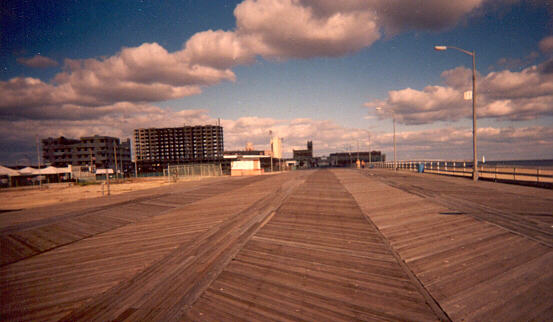 View north on Asbury Park’s Boardwalk, a frequent location in The Imagination Thief. The 11-storey building in this image was a structure known as C-8 (now demolished): this is another of the main locations in The Imagination Thief, where it is called the carcass-building, owing to its never having advanced beyond being a concrete shell. 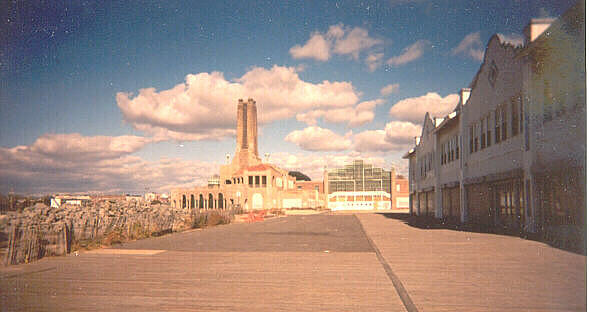 View south on Asbury Park’s Boardwalk, to the Casino at the end, as appearing in The Imagination Thief. 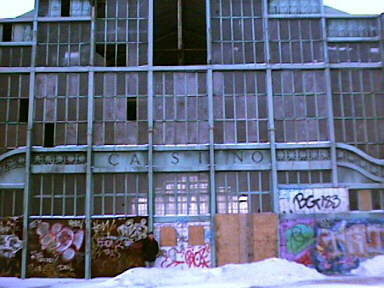 The Casino in Asbury Park, as appearing in The Imagination Thief. 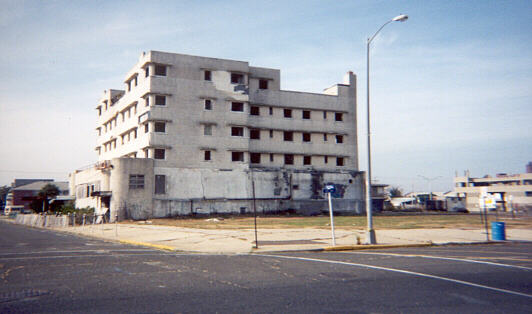 The Albion Hotel (now demolished), Asbury Park, as appearing in The Imagination Thief.